SKYJACK PARTNERS WITH FIMATEC AHEAD OF BRAZIL’S INFRASTRUCTURE OVERHAUL

Skyjack is working with Fimatec Equipment, a Rio de Janeiro-based equipment rental company, to help the city prepare for an increase in visitors and activity due to international events such as the 2016 Summer Olympics in Rio.

Hundreds of impressive infrastructure projects are currently underway in Brazil, and the arrival of Skyjack’s simply reliable aerial work platforms (AWPs) are essential to helping with the country’s progression onto the global stage. Despite a recent economic slowdown, the country still tops the list of international investments in infrastructure, according to recent industry reports.

“The simplicity and straightforwardness of its design, combined with the quality of the materials and components, make all the difference when we’re helping to install new billboards or complete new hotels to meet growing demands.”

Initially a forklift specialist, Fimatec expanded its machines portfolio in recent years to accommodate new customer demands. In early 2013, the company acquired its first Skyjack scissor lifts and has since added dozens more to its fleet. The Skyjack lifts enhanced Fimatec’s industry-minded equipment offerings, which caters to growing segments in southeastern Brazil, such as wholesale, logistics, transportation, and other large-scale industries.

“Skyjack came to Brazil at a time of great opportunity and expansion,” Abreu said. “The region is seeing an expansion in the professionalization of the construction sector and new safety laws designed to protect workers operating above ground-level.”

Not only is Skyjack providing top-notch quality AWPs, the company is also helping to expand the culture of operator safety in the region.

“Skyjack has also played an important role in educating the market on the advantages and benefits of using AWPs in countless applications, as well as increasing awareness of worker’s safety,” Abreu said.

Customer satisfaction is key
For Hélio Yomura Jr., a sales manager at Fimatec, not hearing from customers means the machines are doing what they are supposed to be doing — providing contractors, engineers and job site personnel with steady support anywhere the lifting of workers and materials to height is needed.

“We don’t hear customer complaints about Skyjack’s access equipment,” he said. “Our service teams often mention how simple they are to maintain and the overall easiness to work with the equipment.”

Some of Fimatec’s primary AWP customers are typically large industrial companies that have vast product inventories, according to Yomura Jr. The demands of massive industrial operations, with hundreds of machines operating at once and large sums of revenue at stake, requires reliable equipment — ideally ones like Skyjack machines that are easy to maintain and have close to zero downtime.

“Large distribution center operators and construction contractors nearing the end of projects also use Skyjack’s scissor lifts for a smooth completion of new structures,” he explained. “So far, our experience with Skyjack machines has been remarkably positive.”

Advancing in Brazil and beyond
Skyjack’s expansion plan for the region continues to advance swiftly. The goal of providing customers with AWP equipment that are smartly designed, easy to use and affordable to maintain has been well received in markets like Brazil, where costs must be kept low.

Both rental companies and end customers benefit from dependable machines backed by responsive after-sales teams throughout Brazil and Latin America. A fast next-day parts shipping, which relies on a strategically located parts stock in São Paulo state, has won Skyjack many fans among industry enthusiasts.

“One of Skyjack’s biggest strengths is listening to the needs of the Latin America market with acute attention, offering new models and features based entirely on customer feedback,” said Rafael Bazzarella, Skyjack’s sales manager and senior IPAF instructor in Latin America. “Since entering the region a few years ago, Skyjack has learned from its distributors, customers and industry veterans, and has become a company better-attuned with the region’s unique necessities.”

Founded in 1991, Fimatec is a leader in the storage and handling segments. The company prides itself for maintaining comprehensive market knowledge and high standing with its partners and customers. From humble beginnings, the company now has a 2,400-square-meter (25,8330-square-feet) facility strategically located next to Rio’s main highways. The firm operates in the states of Rio de Janeiro and Espírito Santo. 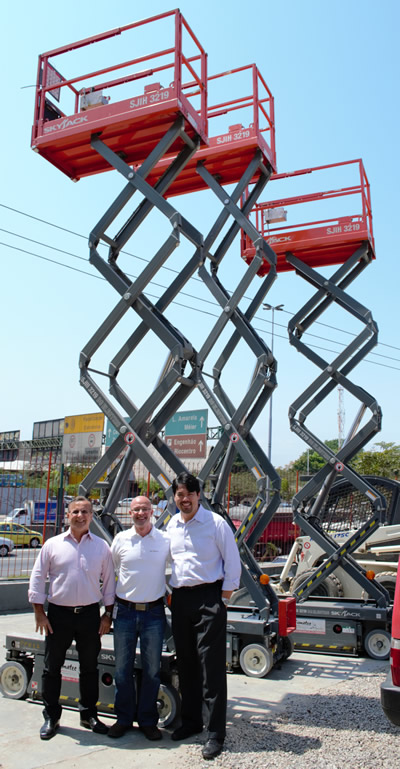